The lost recordings with The Dramatics

The Dramatics featuring Willie Ford made some recordings in 2017. And, that Willie Ford had the intention of releasing these was made clear, among other things in this interview.

After Willie Ford had made his transition last year, we connected with Tony Green, who was hired to do these recordings, to ask how they are kept safe.

Perhaps we hadn’t expected Mr. Green to respond, but he indeed did, and was most jovial and patient with us in a very long conversation, that included many a thing and also lead to a nice article here, suggested by Green, but the information about the Dramatics recordings never fell out during any of all this.

We do understand. Green – a long time member of The Dramatics' backing band, in the 70s and 80s, has been helping many out with a lot in Detroit, and was a given individual for Willie Ford to turn to with recording ambitions. Green also has a very large ‘’vault’’ with a lot of music. But. But! Very little of it is probably with an act with a fifty year long career and thirty-five something hits. The Dramatics however is such an act! And Willie Ford was an original member of The Dramatics, who was part of their massive breakthrough, with their hits "What You See Is What You Get" and "In The Rain". Willie Ford was part of this act for five full decades! And these Dramatics recordings are in the vault of Tony Green. As we also understand it, someone who hires someone else for recordings is the legal owner of the recordings (see the 6th paragraph). So, maybe "old" compadres don't think about the legalese too much, at times, between each other, but now that Willie Ford is no longer here, and this is work that he in fact left behind, his rights concerning work that he did is a thing. And further, where it comes to The Dramatics specifically, legally working out what is what in terms of rights is not of unknown importance to anyone involved with this act. There are different sides here.

Tony Green has put Dramatics’ sounds to collages of clips from the internet on YouTube. It is definitely our opinion that these recordings are too important to be handled like that.

Yes, it is a challenge to release music in this day and age. But these recordings deserve their proper release, probably after some editing by a top-notch producer and editor. There would no doubt be an interest in Dramatics’ recordings, and for people to finally, for example, at long last hear Willie Ford sing longer solos, which he does on some of these cuts.  It is unbelievable that Willie Ford didn’t lead on more songs than he did with The Dramatics. He had a unique bass voice, that truly was something few other acts could begin to match, and if you are shrewd as a music maker you sometimes go with what you have that no one else can top.

What was a little worrying during our conversations with Tony Green, was, that at one point we sent him a clip where The Dramatics featuring Willie Ford performed the single that they did release, a couple of years prior, ‘’Victoria’’, which was on a link on Fox2 (fox2detroit.com/mornings/54099142-video) – and that this clip disappeared from the link the day after we had sent it to Green. It was the most peculiar coincidence. It had obviously been up for a couple of years. It was a couple of years old. We asked about this, but there was no reply as to this. 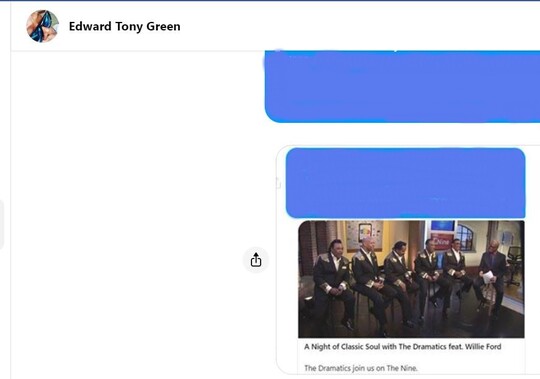 Our original sending of the clip, inside our getting back to it for the clip disappearing

What that link looks since

There is little doubt that the loyal soul music fans out there would cherish the recordings with The Dramatics featuring Willie Ford.

We have reached out to Tony Green again, before writing this piece, asking for his comments if he cared to share them, but Green has chosen not to respond.