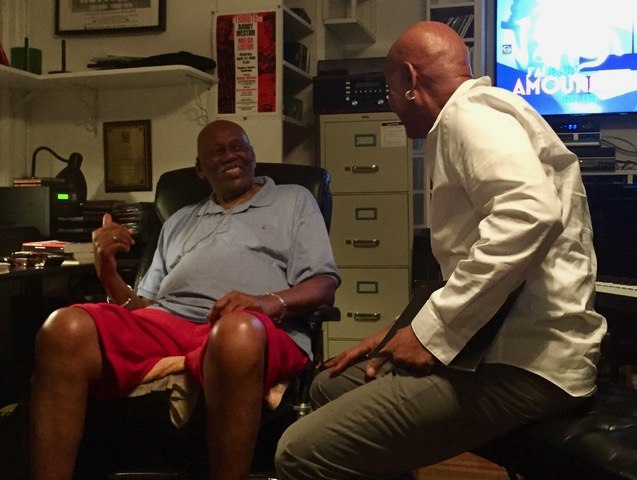 An article by TK Blue. The pictures show two great musical friends meeting for the last time in this realm, in August of this year.

On Saturday Sept 1, 2018 we lost a true musical giant, innovator, NEA Jazz Master, and a warrior for the elevation of African-American pride and culture. His compositions disseminating the richness and beauty of the African aesthetic are unparalleled. Randy was born during the era of extreme racism, segregation, and discrimination in the United States. His life's mission was one of unfolding the curtain that concealed the wonderful greatness and extraordinary accomplishments inherent on the African continent.

I am blessed and honored to have been a member of his band for 38 years. Baba Randy was a spiritual father and mentor for myself, and so many people. Our last public performances were in Rome, Italy July 19th and Nice, France July 21st with Billy Harper on tenor sax Alex Blake bass Neil Clarke percussion and T.K. Blue alto sax and flute.

I will always remember his extreme kindness and generosity. My first four impressions of Dr. Weston reveled who he was and what he cherished:

--Early 1970's Randy in performance at the East in Brooklyn with his son Azzedine on African percussion (a clear demonstration of   his love and mentorship for his children. I also remember Randy inviting the great James Spaulding to sit in on flute)

---Late 1970's I performed with South African legend pianist Abdullah Ibrahim at Ornette Coleman's Artist House Loft in Soho NYC. Randy attended this show with his father Frank Edward Weston and his manager Colette (his profound love, respect, and reverence for the elders and his admiration for other artists, especially from the continent of Africa)

Lastly when my mom Lois Marie Rhynie passed in 2014, there was a last minute issue with the church piano. Dr. Weston paid for the rental of a beautiful baby grand piano and performed gratis.

Randy Weston is the last pianistic link between Duke Ellington and Thelonious Monk. His forays into improvisation are clearly a manifestation of the highest tier regarding a creative genius with astounding originality. His compositions are in the pantheon of renowned jazz standards.

Words are inadequate to express my love, admiration, appreciation, and gratitude for such an incredible human being. May his spirit rest in paradise for eternity. We will miss you Baba Randy!!!

This beautiful text was written by T.K. Blue in the memory of his close friend and mentor Randy Weston. We are so grateful to T.K. Blue for sharing this with us and our visitors. Thank you, T.K., for putting this wonderful text for the giant, Dr. Weston, here.
Both Randy Weston and T.K. Blue are contributors to this site, something that we are needless to say extremely proud of.
Read Randy Weston's article HERE. Published in January of this year.
Read T.K. Blue's previous article HERE. Published in 2014.

Music is life itself. Without music our planet would be dead. Music is our 1st language.

I travel all over the world but I speak Music to people, not Japaneese, not Chinese, German, etc.... MUSIC!

I do not know about computer music. I listen to the ancestors – they left us great music – a legacy: Duke, Armstrong, Count Basie, Nat King Cole, Thelonious Monk etc..

The whole concept of Music began in Africa thousand years ago in the Nubians Civilizations. Everyone should read these books: “Egyptian Rhythm” by Moustapha Gadalla, “Golden age of the Moor” by Ivan Van Sertima and “100 Years of Negro in show Business: The Tom Fletcher Story” by Tom Fletcher. 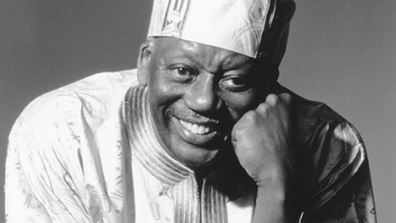 My History about James Reese Europe in the late 1940 is that I went to a night club in Harlem named Lucky's, and I met the owner there: the great pianist and composer Luckey Roberts, I was young amateur pianist.
He told me how James Reese Europe Championed black Music by organizing African American Artist on every level. He formed the Clef Club – the first Union of African American Musicians.
His was the first black orchestra to play Carnegie hall with his 1912 Symphony of Negro Music with 10 pianists.
The great Eubie Blake told me that James Reese Europe gave us a statute of professional Musicians, and he inspired me to organize the African American Musicians Society with Melba Liston, Ray Bryant, Sadik Hakim Nadi Qamar, and John Handy
While living in France  I went to some cities where James Reese Europe played for the French and American Soldiersduring the first world war, Paris, Aix les Bains, Grenoble, Chamberry, Lyon –  bringing Music they never heard before, that lifted the Spirits of the soldiers and the French people.

My New double solo Piano CD called SOUND was recorded on Nagra DII digital at Hotel Montreux Palace during the Montreal Jazz Festival 2002 and have decided to put it out by my Label "African Rhythms " and take me back to my solo career in Europe .

Randy Weston is an eminently legendary pianist and composer, born in 1926. After serving in WWII Weston began his career in music and was voted New Star Pianist in Down Beat Magazine in 1955. Highly decorated and honored since, Weston was based in Morocco for years, where he also ran his own club. He has been releasing records since 1954, and in 2010 his autobiography "African Rythms: The Autobiography of Randy Weston" was published and celebrated as a highly important piece of work to the story of jazz.

February 10th, 2018 Randy Weston celebrates the legacy of James Reese Europe at The Kennedy Center. Find out more about that HERE.

And find out more about Randy Weston and his new release HERE.