An article with Ian Ethan Case 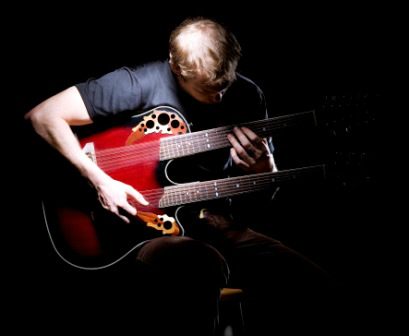 An article with Ian Ethan Case

KEEPING A BEAUTIFUL TONE WHILE DOING MANY THINGS AT ONCE

Well, that's definitely a goal and an ongoing endeavor for me, but so far I find that the more mental bandwidth I can dedicate to just listening (while playing), the better I can play, and that includes everything from time and intonation, to tone, to dynamics, to playing the right thing at the right time (and resting at the right time) and so much more. In terms of tone, it is definitely something I care a lot about and it's a challenge on the double-neck since it wasn't really designed for the ways I play it, so there isn't an existing set of instruments and related tools to help you sound good. If you play cello or piano or trumpet or sax or a normal guitar using normal technique, you automatically benefit from the hundreds of years of trial and error that have gone into perfecting those instruments and the decades of development of amplification systems for those instruments. I've had to start from scratch in some ways as far as all that goes, since no one else really plays the particular ways that I do. So it's taken several years and a lot of work to get things to sound halfway decent in terms of the equipment involved.

But as far as the actual playing part goes, I guess it's actually somewhat like that too - there isn't a really established knowledge base or system of learning the kind of stuff I'm doing, and if there was I'd probably be doing something else! So I just try to take joy in being extremely patient and putting hours in on little minute details when I'm trying to figure out what I need to do on the instrument in order to get a certain note of the melody to pop out a little more, or to keep a certain string from ringing on a certain chord when 1.5 of my hands is busy doing something else and the other half hand has to play 4 notes - things like that. If I have to slow WAY down and examine what's going on then I do. I'm always trying to match the sound in my head more closely, because the ideas that come tend to be a lot more perfect than the execution of them. So it just takes work and you have to really want it and care enough to put a ton of time into it - so that's what I'm doing to the best of my ability.

When I started doing all the live looping, it was definitely a lot more to keep track of, and I think I sounded truly terrible for about three years. Just this year I've finally started to feel like it's sounding reasonably close to the way it should, reliably. I just had to learn some new skills so that I could run 6 loops and a bunch of other pedals with my feet while playing some pretty dense and technical stuff on two necks at once, or on the fretless guitar where you have to really give a lot of attention to intonation. Again there wasn't much of a template for how to do all that at once, but it just takes practice and caring enough to really want to do whatever it takes to make it go right and be able to pull it off live. In a way it's nothing compared to what a really good drummer does, using all 4 limbs at once, or an organist that comps with the left hand while doing a bass line with their feet and soloing with their right hand! The key for me is to hear it all as one thing in a way - being aware of each individual part but really hearing and feeling it as a single collective thing that makes total sense. Otherwise I don't think I could do it, or even play the double-neck without any looping.

Ian Ethan Case has studied at Berklee Collage of Music. He is a multi-instrumentalist, who got a lot of attention at NAMM in January 2013, where he made quite a few rethink the possibilities of the guitar, experiencing the many ways in which he brings his acoustic double-neck guitar to life. He has released the CD ''Into Open Land'' and more. He has recently performed with Jeremy Kittel (Turtle Island Quartet, Bela Fleck), Nathaniel Smith (Natalie MacMaster, Chris Thile), and Matt Kilmer (Lauryn Hill, Simon Shaheen), as well as with current and former members of the Boston Symphony Orchestra and Boston Pops Esplanade Orchestra.

Listen to the recordings of Ian Ethan Case here

Next post: Carol Pemberton tells the story of Black Voices